Some thoughts on my obsolete RimWorld mod, Feed the Colonists

Way back in the mythic era of 2016, I published a mod called Feed the Colonists for RimWorld. It added a meal recipe that allowed players to cook 4 meals at once.

Here is the wild of how it was incorporated into the main game.

What was the “Feed the Colonists” mod

Cooking is really inefficient in RimWorld. Here are the steps to make a meal:

This is really time intensive unless your stove is directly adjacent to a stockpile with everything you need to make meals.

I made Feed the Colonist as a simple content-based mod to add recipes which took all the ingredients for 4 meals, and then output 4 meals. To simulate the efficiency of preparing multiple meals at once, I multiplied the work cost by 3.5 instead of 4 (300/meal -> 1050/4 meals).

It wasn’t anything fancy, and since it’s all just XML honestly you could have taken anything and output anything (ex: berries -> assault rifles).

It Got Popular, Everyone Got Fed

This is the part that surprised me the most. At the height of its popularity, Feed the Colonists had over 90,000 subscribers on the Steam Workshop. 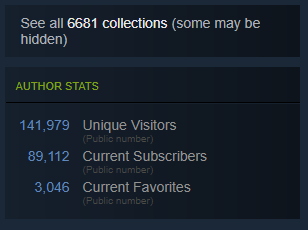 89,000 as of June 2020. I imagine most people have it disabled and didn’t bother unsubscribing.

I created the mod just to test out what publishing to Steam was like. I only expected me to play it, and maybe a friend or two to download it out of support.

I couldn’t and still can’t believe the incredible engagement that the mod got, especially considering how simple it was.

It’s really weird to this day to think about how there are Google search suggestions for the Feed the Colonists. 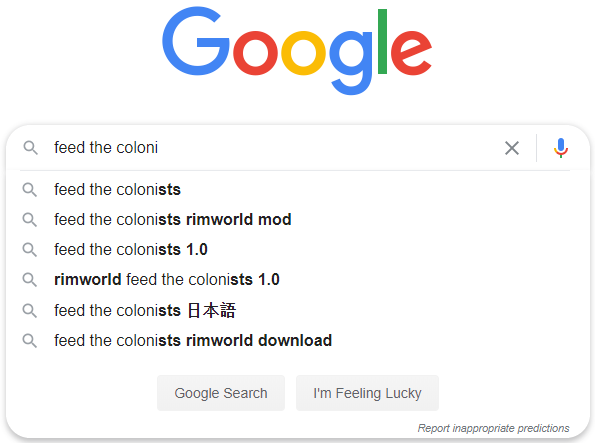 RimWorld launched version 1.1 on 2020 February 24, and it included 4x recipes for Meals. In a few patches, 4x pemmican was added.

This happened before with Crafting Hysteresis in Alpha 17 https://steamcommunity.com/sharedfiles/filedetails/?id=750111404. RimWorld incorporated the functionality into the game, and all was good. Everyone would get to enjoy it now!

So in 2020, I saw the patch notes and Feed the Colonists effectively got incorporated into RimWorld. They ate my mod! I’m very complimented that it was such a good idea that it made it into a platinum product, lol.

RimWorld has sold over a million copies. Platinum status! https://t.co/U1PvQgFYG5

Fun fact: Tynan gets @ in this thread and vows to look into the “Pemmican situation”. 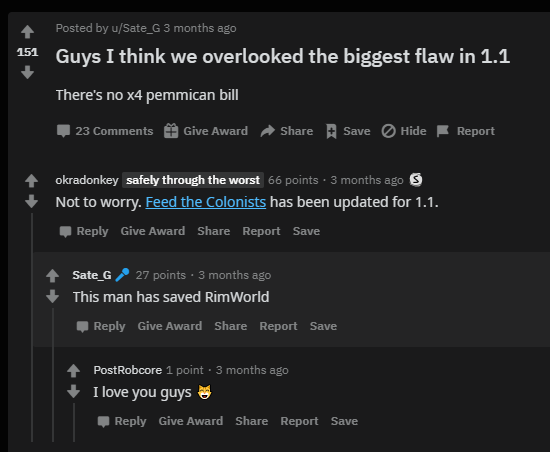 What I Wanted RimWorld To Do Instead

Ideally I would want RimWorld to create something like this mod, but in the game code and for all recipes.

RimWorld should “batch” small crafts. A colonist taking on work should take on as many repeatable tasks as possible in a time frame, ex: 4 in-game hours.

Aside from X hours as the standard, factor in these stats to determine how many tasks should be completed in one working session:

The colonist should grab enough resources to repeat the task multiple times in a “reasonable” amount of time. I think colonists can make more than one meal at a time. :p

Why it Probably Couldn’t Happen

This would be really hard to implement and balance. What should determine when colonists should make more than 1 of something? Sure they can make 2 Smokeleaf Joints at the same time and it won’t take long, but what about 2 Shirts? Should the output be parallel or serial? How should this affect skill gain? Does the base time for 1 work unit of Research take the same amount of time as 1 work unit for Smithing?

It’s much easier and more straightforward for the game to just make 1 per task, unless the task explicitly says it will make more than 1.

It’s impossible to know what’s going to take off and what isn’t. I named this mod as I was publishing it, I had no idea it would get so many subscriptions.

“Recent update seems to have caused a non-start bug”

It was June 2017. I published a new version of Feed the Colonists for Alpha 17, and then went to bed.

During lunch at work the next day, I checked the mod page to see how it was doing. Users reported that the mod was breaking their game!

I tested it before I pushed it. I triple checked it! I looked at the same lines of XML for hours!

When I got home I immediately fixed it. It was just a single XML <id></id> value to fix.

I thought about how people coming home were just looking to have some fun for the evening, and my mod spat a bunch of errors into their faces.

I don’t think that I broke anyone’s game completely since it was a content mod, nor do I think that everyone who subscribed to the mod was actively using it, but it was still really nerve-wracking.

Lesson Learnt: Never publish something and then go to bed

Always publish at the start of your ‘work day’ or a least when you have time to watch it roll out for a couple hours.

Also invest in tests, but shh. 🤫

The Future of Feed the Colonists

Well to be blunt: for the mod there isn’t one.

The mod for RimWorld 1.1 and higher just adds 4x kibble. I don’t really see a reason to keep supporting it since kibble isn’t that hard to make in bulk and it’s not required to be refrigerated.

I’m working on a standalone Feed the Colonists game

Take on the mantle of a tireless chef who also happens to be the mayor. Prepare meals to feed your colonists, while planning the future of a small sci-fi settlement.

Feed the Colonists is an upcoming 2D game written in Unity for Windows PCs, and it will be distributed through https://itch.io.

Note: The Feed the Colonists standalone game is designed and written by me (PostRobcore), and it is not affiliated with RimWorld/Ludeon in any way.