Game design can be intimidating and overwhelming. It feels like all the good ideas have been taken, and anything that can be created is just derivative. Sometimes inspiration strikes me, and I have an idea for a game mechanic that comes fluidly. An idea so good that I’m convinced that everyone will love to play it!

Other times I sit in front of my notes and wonder why all my creative desire disappeared. I start working on a half-formed idea, or even a half-programmed one, and it breaks my heart as it falls apart in front of me. Was it even fun, anyway?

When a block or a slump happens, I like to take a break and then seek inspiration.

Let’s take a detour: I love animation. Hayao Miyazaki of Studio Ghibli traveled to Europe when researching art for Howl’s Moving Castle (my favorite movie), and that sentence alone is really wild. He traveled to research art.

Sometimes a change of scenery, or even just a change in activity, is all that’s needed to get recharged and ready-to-go again.

Usually I’m hesitant to look at other games and designs when I’m designing something myself, since I don’t want to copy it. There’s a right time to consume content, since if you give it enough time in your brain, you will eventually put a unique spin on it.

At the least you might even remember it wrongly, causing an accidental creative spark (try to sing a song that you haven’t listened to in a year).

Last year I bumped into a website which really inspires me all the time: Three Hundred Mechanics! http://www.squidi.net/three/

I love the illustrations on this site, and they instantly sell the idea and fire me up. 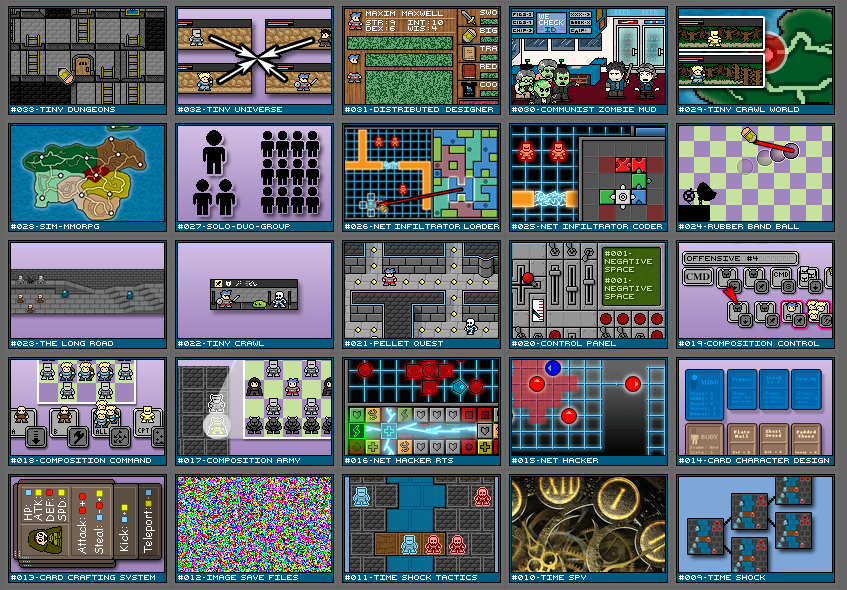 The rest of this post is a collection of some ideas that I really enjoyed reading. I don’t want to go into a lot of detail about them, but I’d like to leave these here as a jumping-off point if you want to poke around Squidi’s site.

Multi-Pawn CYOA (choose your own adventure)

I love this style of asymmetric gameplay. It reminds me of the Pathfinder card game by Paizo, where players move themselves to locations on a game board and explore the locations on their turn, often independently.

Whether the player is in control of a single character or an entire party, this idea flexes both strategic and tactical muscles, as they will need to decide where to put their resources and how best to conserve them for the challenges ahead.

This idea also works for multiplayer as well, if you gave players control of individual parts of the part (or even individual characters). There’s also opportunity to make it competitive since you could have players racing to an objective, or have a player play the opposing force (monsters? the evil empire?) under the same rules as the other player. Especially if it’s online and players can’t view each other’s pawns.

This one is really cool and sells me so much on how just a few illustrations can really bring home a point and get the creative juices flowing.

I like the idea of composite skillsets in a player. Final Fantasy Tactics Advance (my favorite tactics game 🥰) does this in the form of letting characters permanently memorize abilities from equipment if they’ve been used enough.

Collectable Tactics makes it so players might seek out challenging encounters to get an advantage in their upcoming encounters in the game.

This is also present in Epic Battle Fantasy V, where players can capture enemies instead of outright defeating them. Which lets you use their unique powers by “summoning” them during battle.

If a designer put this game mechanic in an openworld game where the player can sequence break (ie: going to a high level area way before they’re ready), then it could lead to some really interesting risk/reward scenarios, especially for people looking to min/max or speedrun a game.

I like this one for its simplicity. It shows how a designer can quickly put together a huge game world with consistent rules. If a designer used something like this with an overworld to tie together locations, then I think it would facilitate fluid and engaging gameplay.

This mechanic can pretty easily fit into the strategy RPG format (think Fire Emblem), and tell a story between levels. The results of the player’s choices and how the previous levels went could be used to influence which characters or locations are available later in the game.

The combat blurb is interesting. I thought it would end up being traditional move-and-attack turn-based strategy, but instead Squidi designed more of a puzzle game (think like Plants vs Zombies).

Right at the centerpiece of this post is a really good illustration. Take it in for a moment.

I like how this post uses Battleship as inspiration, which draws back to what I mentioned earlier -> seek inspiration!

Sometimes full ideas just flow into your brain when you have the right idea and the right twist for it.

The name on this mechanic one is fun, I honestly thought it was going to have boats in it.

First off - wow! This mechanic idea was originally written in 2005!

This one was an especially fun read since it really demonstrated how to get an idea across using only words and some text-based illustrations. I like it when the barrier to entry for creative pursuits is low, since it makes it more welcoming to new artists.

I immediately thought about State of Decay and Urban Dead while reading this post, which stuck in my brain the entire time.

Also the “Brain Rot” zombie skill in Urban Dead is something I think about all the time. Brain Rot is a zombie skill which reviving zombies really challenging. It fills my head with imagery of tame zombie players sitting around in the laboratories, wasting the time of the poor survivor scientists. It’s cute, frustrating, and so trolly.

Please check out Squidi’s site if you get a chance. It’s really well done and fun to read through. 😸